CMB International have now successfully installed the first ‘dual drive’ screen at Angerstein Wharf in London.
Owned and operated by CEMEX this site is one of the largest operations in the capital supplying over a hundred million tonnes per annum.

With twin production lines, each of the four screens at Angerstein is ‘handed’ either left or right. To further exasperate the issue a spare screen is also shared with a sister operation downstream at Northfleet. This works perfectly until the wrong ‘hand’ fails which entails more downtime until the screen is repaired and re-instated in situ. As this is not predictable it has meant that CMB have on occasion swapped the drive to the opposite side to accommodate the position, all of which meant more downtime and maintenance costs.

A faultless improvement:
After a site meeting, Martin Brough of CMB and Unit Manager Dave Whitby agreed that a new design that would fit either ‘hand’ would be ideal, and suitable for the Northfleet operation as well. CMB subsequently designed and manufactured a top drive screen to replace the first existing Cedarapid screen.

Dave Whitby-Unit Manager, commented, “the new screen has been faultless to date and has also improved maintenance as the bottom screen can be accessed easily with the drives on the top.”

Liam Holland – General Manager CMB, commented,” With the new CMB screen design, the two on-board motors mean that our screen can sit anywhere within their production line and can replace any of the screens with no extra work required. There are also other benefits because the new screen contains a twin shaft 280 unit that is positioned above the screen side plates, which ensures there are no large holes within the side plates to accommodate the shafts (Cedarapids screens have 3 holes in each side plate). This gives the side plates added strength to cope with a higher G-Force, which is often required for horizontal screening to avoid pegging.”

With the first screen being so successful the way forward is to replace the remaining screens within the Angerstein operation.

Dave Whitby, further commented, “we are very pleased, CMB have been very supportive and their experience in designing and manufacturing equipment for aggregate processing lines has been clear from day one.” 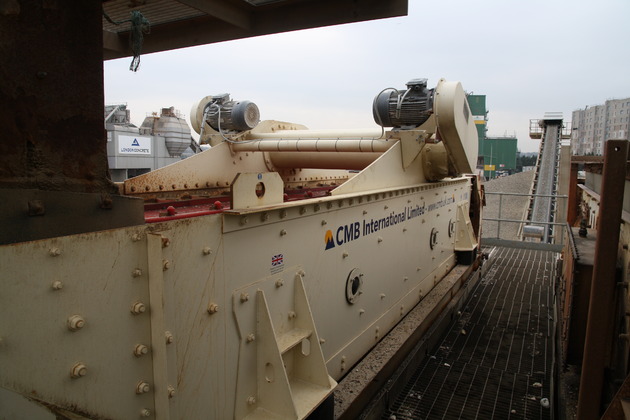